If you follow public and scientific debate about human-induced climate change, you likely have noticed there is a good deal of conflicting information about both the problem and its principal causes.

This is unfortunate, not only as a matter of accuracy, but because the ambiguity can make needed action and essential focus areas much less clear. At its worst, false or incomplete carbon pollution information risks overburdening minor contributors to climate change, while giving major producers of new atmospheric carbon relatively easy treatment, or even an unwarranted pass.

As a study in this, and prompting the infographic below, I recently read an editorial piece, aimed primarily at the perils of meat production, suggesting that more than a quarter of human greenhouse gas (GHG) emissions were from agriculture. If you search this topic, you will quickly find that agricultural GHGs vary considerably by country, but are estimated to average about half of this level worldwide and thus form only a small portion of human-created GHGs overall. 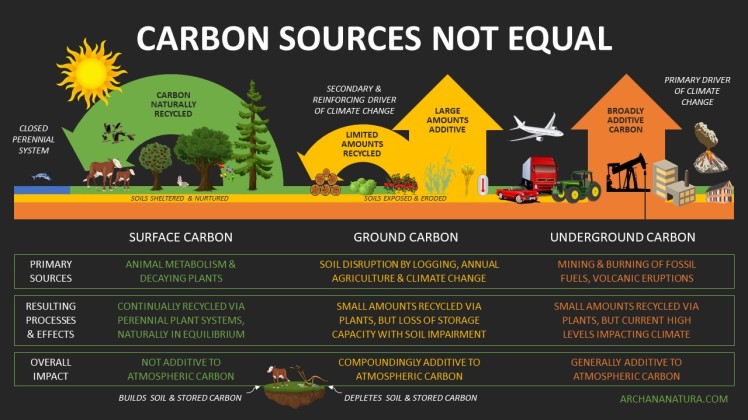 As with living nature overall, the principal direct sources of GHG from human agriculture are animal metabolism and decaying plants, which we can think of helpfully as continually released and in turn naturally recycled forms of surface carbon. Though I should add that this is not the full truth. In particular, natural plant and animal ecosystems are typically perennial or evergreen systems, both producing and using carbon dioxide throughout all or much of the year, and also steadily sequestering or encapsulating atmospheric carbon, via the natural buildup of soils that normally occurs in perennial ecological systems.

But crucially, only some of human agriculture involves perennial ecology, notably pastoral ranching and wild fisheries. Much of the rest of our agriculture instead produces annual crops raised in monoculture, often with the use of GHG-releasing fertilizers and pesticides, and where soil lies exposed, eroding, unproductive, and leaching carbon into the atmosphere for significant periods of time each year. In these cases, and leaving aside fertilizers for a moment, annual crop GHG emissions extend beyond surface animal metabolism and decaying plants to include the release of sequestered, buried, sub-surface, or ground carbon, as soil is exposed to the sun and erodes in the wind and rain. Still, even here total GHG emissions are small overall, though they appear to be increasing with ongoing soil loss from monocrop agriculture and forest clear-clearing, and could increase dramatically with the thawing of Arctic permafrost.

One important consequence of these ideas is that if we return perennial agricultural grasslands and savannas, or ocean fisheries, to natural or wild conditions, we can expect little or no change in carbon emissions. Think about it. Left alone, these areas would soon re-populate with wild animals and plants, which would naturally and perennially grow, release and consume carbon dioxide in balance, and build carbon-sequestering soil in time, as they have for millions of years. To stop this re-population, we would have to prevent wild animals and plants from re-occupying these areas, through one means or another, but with the natural result of destroying these wild, soil and atmospherically beneficial, ecosystems.

My infographic above first seeks to capture the idea that perennial organic human agriculture, while subject to productivity or efficiency opportunities, is largely a natural process and not a principal source of new GHG in the atmosphere today. Second, it emphasizes that soil and sequestered carbon disrupting human activities – from logging and annual agriculture to human-increased air and water temperatures – are significantly unnatural, an important and compounding source of new GHG, and destined to steadily reduce the earth’s capacity to re-absorb atmospheric carbon, new and old.

Lastly, the graphic highlights the primary and indeed vast majority source of human-produced GHGs in the modern atmosphere. This is the mining and use of carbon fuels, or ancient soil carbons, long buried deep below the Earth’s surface. Such underground carbon includes coal, oil, and gas-based transportation, electricity generation, industry, building, business and consumer goods, heating and cooling, plant fertilizers, and agricultural machinery.

In addition to unnatural soil-degrading and vegetation-inhibiting agricultural practices, this is where our modern climate change problem squarely and principally lies.